Published by Ivan M. Granger at 8:10 am under Poetry

The Thirsty
by Mevlana Jelaluddin Rumi

Not only do the thirsty seek water,
The water too thirsts for the thirsty. 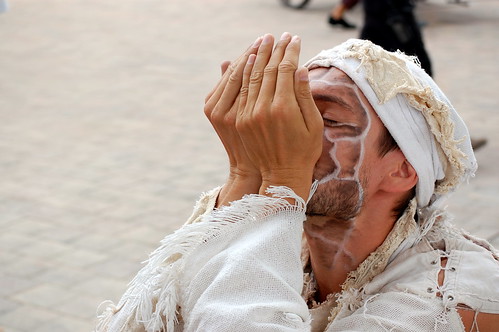 Not only do the thirsty seek water

As I grow older, the idea of spiritual thirst becomes ever more real to me. As a young seeker, in my adolescence and early adulthood, I was consumed by such painful blind thirst that I couldn’t have named it “thirst” back then. It was simply the searing ache of my days. It was my whole world.

I went a little mad with my thirst. I kept seeking to withdraw, from society, from the world, retreating into the forests of Oregon, the mountains of Colorado, the jungles of Hawaii where perhaps I might glimpse what was truly essential. I fasted my body into emaciation. I meditated in caves. I walked barefoot and shirtless in the wilds. I spoke with drifters and the homeless, trying to know their hearts and see through their eyes.

Some part of me broke, I think. And then it broke open. That’s when I knew what it meant to drink and no longer thirst.

And a strange thing– what had felt like shattering effort driven by wild thirst suddenly seemed like nothing at all.

The water too thirsts for the thirsty.

Perhaps it wasn’t my terrible thirst that had driven me at all. Perhaps I was drawn by the water’s thirst for me. And all that strain and adventure, well, that was just the story I told myself along the way.

What has been most odd to me is my return to society since then. I made a conscious choice to come in from the wilderness, to rejoin the world, to hold a regular job, have a stable home, and reconnect with people (and try to share a taste of that sweet water with others). More than a decade later, it still feels strange to me. At times I find myself going through the motions, simply passing as a “normal” person. The challenges of daily life, of paying bills, of caring about my body’s health, of establishing regular patterns others can rely on, these practices still seem foreign to me at times, but I consider them a major part of my spiritual practice now. It used to be that the only things that made sense to me were transcendence and escape. These days I find the most humbling truth in being present, and watching with wonder, allowing life to be simply as it is.

I’m less consumed by my own thirst these days. I feel the water’s thirst for the thirsty world instead.

Rumi was a war refugee and an asylum seeker. He was born in Balkh, in what is today Afghanistan. While he was still a child his family moved all the way to Konya in Asia Minor (Turkey). They moved to flee from Mongol invaders who were beginning to sweep into Central Asia. Konya, far to the west of the invaded territories, became one of the major destinations for expatriates to settle, turning the city into a cosmopolitan center of culture, education, and spirituality. (These lands were part of the Persian Empire, so, while he lived most of his life in what is today called Turkey, culturally he was Persian.)