Published by Ivan M. Granger at 9:24 am under Poetry

When I consider the virtue of abusive words,
I find the scandal-monger is my good teacher.
If we do not become angry at gossip,
We have no need for powerful endurance and compassion.
To be mature in Zen is to be mature in expression,
And full-moon brilliance of dhyana and prajna
Does not stagnate in emptiness.
Not only can I take hold of complete enlightenment by myself,
But all Buddha-bodies, like sands of the Ganges,
Can become awakened in exactly the same way. 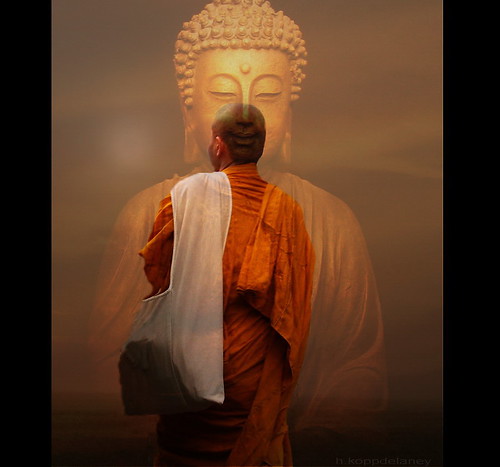 This opening line is meant to be humorous. I picture the Buddhist monks of China and Japan laughing as they read this short poetic discourse on “the virtue of abusive words.”

But the poet is also saying something very important to the sincere spiritual aspirant.

I find the scandal-monger is my good teacher.

People who offend us, who spread rumors and lies, those we might think of as enemies or petty tyrants are sometimes our best teachers. They continuously pressure test the maturity of our practice.

It is easy to go along thinking, ‘Oh, my meditation is getting so deep and I think such kind thoughts about people,’ but when someone offends that carefully constructed spiritual facade, do we instantly boil over with outrage? Does it suddenly become essential that we correct their false perception of us?

No matter how offensive or cruel the other person may be acting, our reaction is about ego. Are we getting proper acknowledgment for who we are and what we have accomplished? -Which is a question only the ego asks.

The poet then says something especially interesting:

If we do not become angry at gossip,
We have no need for powerful endurance and compassion.

All of that spiritual practice we do to endure upset and hold our thoughts safely within the bounds of compassion, it is all really about making the mind spiritually acceptable in its patterns. That certainly has its importance, but it is ultimately a path of frustration. The mind that emerges from the ego-self is never tamed, it is always selfish and me-focused, always quick to anger in order to reassert itself as the center of importance.

If we truly learn to let go of all of our pretense and self-importance, however, the instinct to get upset at everything, including what is malicious, falls away. And then there is no need to work so hard at enduring offense or somehow squeezing compassion from a constricted heart. Endurance becomes natural patience with the world. And compassion is simply recognized as inherent within the universe and not the result of our own heavy effort.

When we have truly matured in our awakening, when we have allowed the endless tensions that comprise the ego-self to fall away, along with its tendencies toward offense, then our expression becomes natural, fluid, without effort.

And full-moon brilliance of dhyana and prajna
Does not stagnate in emptiness.

Dhyana is meditation, and prajna can be translated as clarity. When we become mature in our practice and realization, we are flooded with a brilliant light that is often compared with the full moon.

When our practice is too much about effort and harsh control, there is the tendency to stagnate, to get caught up in our patterns of policing everything about our thoughts and actions. A certain amount of that approach is an important discipline, but we can’t make the mistake of becoming totalitarian toward our own psychic energies. The goal is not greater or more perfect effort but, instead, to become effortless, to drop the self-important, self-focused self and, with supreme humility, settle into our true nature — from which our inherent compassion and goodness naturally flow.

Not only can I take hold of complete enlightenment by myself,
But all Buddha-bodies, like sands of the Ganges,
Can become awakened in exactly the same way.

So you see, those people who irritate us, who offend us, even those who attack us, they should be among our most cherished teachers. They poke holes in the ego. They deflate our pretenses. They passionately remind us that we are not the psychic facades with which we wrap ourselves. They test us with an intensity missing from other teachers. They show us the pathway to selflessness and, thus, are highly charged agents of enlightenment.

(Caveat: I don’t want to suggest that one should passively accept cruelty or violence or remain in the presence people caught up in toxic patterns. The point here is to recognize what in ourselves we are defending. Personal safety and basic self-value are important and should be protected. But when it is our own self-importance that feels threatened, perhaps it is an opportunity to laugh at ourselves instead.)

Praise to those who irritate us! (Grumble.)

While still a youth, Hsuan Chueh left his home and began to practice meditation and study Buddhist texts. It is said that he received enlightenment upon reading the Vimalakirti Nirdesha Sutra.

Hsuan Chueh is perhaps best known for composing the Cheng Tao Ko, a collection of Zen teaching poems. This work has been popularized in the West through the influence of Japanese Zen schools, where it is known as The Shodoka and he is referred to as Yoka Genkaku.

4 Responses to “Yoka Genkaku – The virtue of abusive words”