Published by Ivan M. Granger at 10:10 am under Poetry

Most noble
evergreen with your roots
in the sun:
you shine in the cloudless
sky of a sphere no earthly
eminence can grasp,
enfolded in the clasp
of ministries divine.

— from Symphonia: A Critical Edition of the Symphonia armonie celstium revelationum, by Hildegard of Bingen / Translated by Barbara Newman 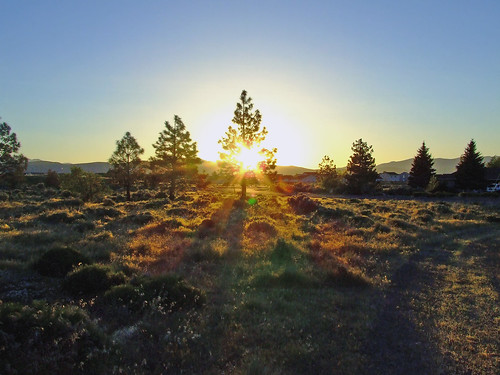 Every week or so I check the visitor statistics on the Poetry Chaikhana website to see which poets’ pages are the most visited. I regularly update the top ten on the Poetry Chaikhana home page, if you’re curious. Hildegard von Bingen is often one of the more popular poets on the site, but I realized it has been a while since I last selected one of her poems for an email. It also occurs to me that I have featured quite a few contemporary poets recently, and perhaps it is time to dip into the rich well of wisdom from our past. So something today by Hildegard von Bingen…

The evergreen tree is used by Hildegard von Bingen as a symbol of eternal life — it is always green and vibrant, even during winter, the season when the light withdraws, the season most associated with turning inwards, meditation and death. Within the Christian tradition, the evergreen is specifically a symbol of Christ, the one who overcomes death, the one who is the embodiment of light and eternal life. Christ is particularly associated with the tree based on prophetic associations of the messiah with a tree and, of course, because of his crucifixion (the cross being another representation of the tree).

So when Hildegard sings to the evergreen, she is singing to Christ, the Beloved, the Living One.

But what does Hildegard mean when she refers to the tree as having its “roots in the sun”? This is one of the more interesting lines to me. In the Western alchemical tradition, the seat of the body, the “root,” is sometimes associated with fire (in Yoga we would say the fiery Kundalini); and in alchemical engravings, we often find the the image of a sun at the body’s base. Hildegard von Bingen was apparently using the language of spiritual alchemy. This raises the fascinating question: Was Hildegard von Bingen, in addition to being a Catholic nun, also an initiate of secret esoteric traditions? Her work as a healer certainly could have introduced her to medical alchemy practiced at the time.

(An alternate way to read the roots in the sun metaphor is as a yogic image. In Yoga, the subtle energetic body is often described as a tree whose trunk is the subtle spine. Like this yogic tree, Hildegard’s evergreen is upside-down, with its roots in heaven, the radiant crown chakra, making its branches the energetic pathways of awareness that reach outward through the senses into the world. That reading, of course, raises even bigger questions…)

I love the description of the tree shining “in the cloudless / sky of a sphere no earthly / eminence can grasp…” It is as if she is describing a state of pure awareness. Not even a vapor or cloud of a thought exists there. It is a state beyond the control of any earthly power (or the grasping mind). In this space of radiance and life, there is nothing to hold onto — a vision of spacious presence.

This tree, Hildegard’s evergreen “shines,” it “blushes like the dawn.” Hildegard is clearly drawing a parallel with the burning bush Moses experienced in his direct encounter with God. If the burning bush witnessed by Moses is the same as Hildegard’s burning evergreen, and that tree is understood to be the structure of the subtle spiritual body in both cases… well, we, as mystics, have some interesting avenues to explore…

Hildegard was born in Bermersheim, not far from Mainz, Germany to a noble family. She was the tenth and last child to be born to the family. At the age of eight, Hildegard was “given to God as a tithe” by placing her in the care of Jutta, a woman who had chosen a life of solitary seclusion. Hildegard would later describe Jutta as “uneducated,” yet she taught the girl the basic skills of reading, as well as her initial practices in the spiritual life.

Hildegard’s health was always fragile, but she had a rich interior life, by her own account receiving visions since early childhood. Hildegard describes one vision she had at the age of three of witnessing “a brightness so great that [her] soul trembled.”

This experience of divine light was repeated and magnified when she was in her forties. She wrote:

“When I was forty-two years and seven months old, the heavens opened and a blinding light of extraordinary brilliance flooded my head. It blossomed like a fire in my heart and breast, not burning but warming… and all at once I understood the inner meaning of the holy books.”

This was a light that remained a part of her perception throughout her life. Even in her seventies, Hildegard described it as a light that seemed to permeate everything without hindering her ability to see normally, as well.

She is said to have had a natural gift of clairvoyance and the ability predict the future. She was also widely respected as a healer and herbalist, having written works on natural history and the medicinal uses of plants.

Illness was intimately linked with Hildegard’s mystical life. Bouts of illness seemed to be brought on by the tensions that existed between her divine promptings and the limitations of the roles allowed to her as a woman and a nun. She had especially severe illnesses occur prior to the major decisions in her life.

Hildegard’s early life was relatively quiet. A small community of women gathered around Jutta, that eventually joined the Benedictine order. Hildegard herself took monastic vows in her teens. When Jutta died in 1136, Hildegard was elected to lead the monastic community.

It wasn’t until she was in her forties, however, that Hildegard began to gain notoriety for her visions. She was surprised to receive an inner prompting to “tell and write” her visions. She initially resisted and was soon bedridden as the inner conflict played out. Eventually she relented and began to dictate her visions.

The first work she produced was Scivias, a description of a cycle of visions about the relationship of humanity and nature with God. She also composed a collection of music and poetry called the Symphonia. She also wrote extensively about medicine and herbs.

Hildegard’s fame quickly spread, bringing pilgrims and the curious, eventually overwhelming the capacity of the small community. A new, larger monastery was built between 1148 and 1150 in Rupertsberg near Bingen.

Throughout the 1150’s, Hildegard made several teaching tours through the Rhineland.

Although Hildegard had received blessings from Church authorities for most of her work, toward the end of her life she ran into conflicts for, among other things, allowing an excommunicated man who had died to be buried in consecrated ground. She refused to have the body dug up and, as a result, she was not allowed to take the eucharist — a deep wound for a devout Catholic. This ban was eventually lifted near the end of her life.