Published by Ivan M. Granger at 6:00 am under Poetry

My heart wears all forms
by Muhyiddin ibn Arabi

My heart wears all forms:

For gazelles it is an open field,
for monks a cloister.

It is a temple for idols,
and for pilgrims the Ka’ba.

It is the Torah’s tablets
and the pages of the Quran.

Whichever path Love’s caravan takes,
that is my road and my religion. 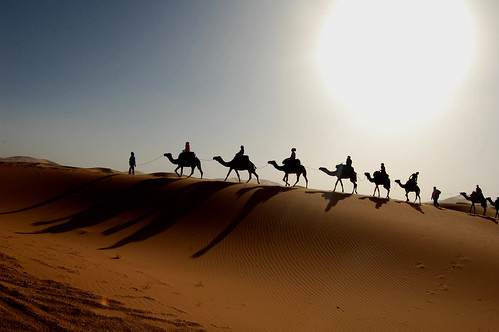 These lines from The Interpreter of Desires are probably Ibn ‘Arabi’s most famous. The entire work is a multi-layered love poem that, like The Song of Solomon in the Bible, can be read as an exploration of the soul’s yearning for God. Ibn ‘Arabi’s poem tells of a pilgrimage to Mecca in which he meets a beautiful young woman named Nizham (Harmony). The ardor awakened by this encounter inspires a quest for the eternal harmony she embodies. Her earthly beauty and grace awakens a yearning for the true Beloved, for God.

My heart wears all forms.

The heart, in this sense, is not just how we feel love, it is the center of our awareness. It is the mirror that reflects whatever we focus on. In other words, the heart, the core of awareness, doesn’t just feel, it takes on the form of what we love. This is why we ultimately become what we love or fixate on, for good and for bad.

And each reflection is recognized as an expression of the Beloved. While we ourselves become formless.

For gazelles it is an open field,
for monks a cloister.

It is a temple for idols,
and for pilgrims the Ka’ba.

It is the Torah’s tablets
and the pages of the Quran.

Can such an awakened heart then reject any school of awakening?

Whichever path Love’s caravan takes,
that is my road and my religion.

But, of course, one must understand what real religion is. It is not stone walls or steeples. It is not crosses or crescents. It is neither creeds nor rituals nor books. Though any one of these, properly approached, can open the door.

Like all true masters, Ibn ‘Arabi reminds us that the true religion is nothing less than Love.

This is an all-embracing vision of reality in which the heart has grown wide enough to recognize everyone and everything at rest within itself. An overwhelming, blissful experience of wholeness, interconnectedness, and joy. Words fail, but that pulse of the universal life does not.

That is what religion is. That is the road.

Ibn ‘Arabi is considered by many to be the greatest Sufi philosopher. His was more of a structured approach to Sufi mysticism directed toward gnosis, in contrast to Rumi’s mysticism which was more directed toward ecstatic annihilation in Love. Ibn ‘Arabi was one of the most prolific of Sufi writers, having composed an immense volume of work in his lifetime in both prose and verse, influencing philosophical and mystical thought, not only in the Muslim world, but also in Christian Europe.

Born in Murcia, in Moorish Spain, Ibn ‘Arabi could trace his ancestry back to ancient Arabia. When he was a boy, his family moved to Sevilla (Seville) where he began his studies. During a childhood illness, he had a transformative vision that set him firmly on the mystical path.

Ibn ‘Arabi traveled throughout the Islamic world — Spain, North Africa, the Middle East. He spent the last ten years of his life in Damascus.

Among his many writings, perhaps his most influential philosophical works are Spiritual Victories (al Futuhat al Makkiya) and Facets of Wisdom (al Fusus al Hikam). Many of the poetry selections here are excerpts from his long poem The Interpreter of Desires. The Interpreter of Desires is a multi-layered love poem that, like the Song of Songs in the Bible and many of the courtly love songs of the Troubadours, reveals itself to ultimately be an exploration of the soul’s yearning for God. It is a tale of a holy pilgrimage to Mecca, in which the hero meets a young Persian woman of pure beauty named Nizham (Harmony). This encounter with such a perfect embodiment of harmony inspires an ardent quest that becomes a quest for the True Beloved, for God.

One Response to “Muhyiddin ibn Arabi – My heart wears all forms”