Clare of Assisi – Place your mind before the mirror of eternity

Published by Ivan M. Granger at 8:57 am under Poetry

Place your mind before the mirror of eternity!
by Clare of Assisi

Place your mind before the mirror of eternity!
Place your soul in the brilliance of glory!
Place your heart in the figure of the divine substance!
And transform your whole being into the image of the Godhead Itself
through contemplation!
So that you too may feel what His friends feel
as they taste the hidden sweetness
which God Himself has reserved
from the beginning
for those who love Him. 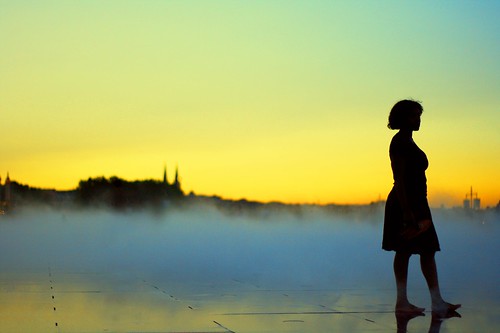 Place your mind before the mirror of eternity!

That could just as easily be a statement from the Buddhist canon. Think about this exhortation for a moment. What does it mean to place one’s mind before the mirror of eternity? The mirror of eternity is that which reflects everything back to us. To place the mind before it is to be utterly naked to oneself. Everything within our awareness is shown back to us, our faults and foibles, as well our victories and inherent goodness — all simply as it is. It is the unblinking view of our own heart. Imagine the steadiness, courage, and supreme humility required to truly do this. To witness our true self that openly, the ego and its constant editing of reality can’t come along.

Place your soul in the brilliance of glory!

A lot of religious language, particularly Christian language, talks about “glory.” The word is used so often that most people just skip over it as churchy filler language. But there is a reason the word “glory” keeps getting used. Glory is radiant, numinous light. Glory is that which shines. Glory is “brilliance.”

For genuine mystics, this light is not empty praise language — it is directly experienced. For the mystic, this light is perceived as being a living radiance that permeates everything, everywhere, always.

The sense of boundaries and separation, long taken for granted by the mind as the fundamental nature of existence, suddenly seems illusory, for this light shines through all people and things.

This is Clare’s “brilliance of glory.”

To “place your soul” in that brilliance is to allow the little self to be disappear into the large Self, like a lamp lost in daylight.

This is the radical path of the mystic, allowing that divine radiance to “transform your whole being into the image of the Godhead.”

I also want to point out the closing reference to “sweetness”:

So that you too may feel what His friends feel
as they taste the hidden sweetness
which God Himself has reserved
from the beginning
for those who love Him.

Those who lose themselves in the divine light in order to gain the light itself, experience — literally — sweetness on the tongue. This is the amrita of Hinduism, the ambrosia of ancient Greece, the wine of the Sufis.

When one enters the sacred ecstatic state, the sensory portion of the mind does its best to interpret the overwhelming bliss through the senses. This is why many mystics taste the most ethereal sweetness on the palette and at the back of the throat, accompanied by a warmth in the belly and heart.

That sweetness is not just a metaphor; it is real, and “reserved” for each of us, as we become an ever more intimate friend to the Friend.

The story of St. Clare is closely linked with St. Francis of Assisi. Clare was twelve years younger than Francis and, like him, was raised in Assisi in a wealthy family. Clare was the third of five children. Because of age differences and coming from different ends of town, Clare probably did not know the young, profligate Francis before his conversion. Doubtless, though, she heard of the spectacle of how Francis renounced his family and wealth and his subsequent wanderings through the countryside helping the sick and the poor.

At the age of 15, arrangements were made for Clare to marry, but she refused. When she was 18, Clare heard Francis give a series of sermons during the Lent season. On Palm Sunday, late at night, Clare snuck out of her family house and, outside the walls of Assisi, met with Francis and his followers. She put on a simple habit and Francis personally cut off her hair as a symbol of her renunciation.

Francis arranged for Clare to stay at a local Benedictine convent, since it would not have seemed proper for her to stay with Francis and his fellow monks. A few days later, Clare’s family discovered where she was staying and tried to drag her from the convent. Only when she revealed her cropped hair did they relent and give up claim on her.

In this story of escapes and secret meetings, there are elements of a chaste and spiritual love affair, much like the ideals of courtly love found in Francis’s beloved Troubadour songs.

Clare founded a women’s community at San Damiano embodying the Franciscan ideal of radical poverty. Other women soon joined, including Clare’s sister and, eventually, Clare’s own mother. But, whereas Francis encouraged the Franciscan brothers to move through the world, witnessing and engaging in the lives of the sick and the laboring class, Clare’s community of women led lives of enclosure, contemplation, and mutual support.

Church authorities had already begun to oppose Francis’s insistence on absolute poverty for his followers. Those in his favor saw this approach as impractical, while the wealthier prelates resented the implied criticism of their excesses, a criticism which paralleled some of the other mystical poverty movements of the time that had been judged to be heretical. But for a group of enclosed women to follow vows of strict poverty was almost unthinkable. Clare spent much of her life defending the right of the “Poor Ladies” (now called the Poor Clares) to maintain their obedience to poverty.

Francis often turned to Clare for advice and inspiration. When Francis was torn between a life of prayer and one of preaching, it was Clare who advised him to speak, saying, “God did not call you for yourself alone.” The Canticle of Brother Sun, Francis’s masterpiece of poetry, was composed while he was encamped outside of Clare’s convent of San Damiano. When Francis was afflicted with the stigmata, Clare made him slippers to protect his bleeding feet.

Clare lived twenty-seven years after the death of Francis. During most of those remaining years she was apparently ill with a mysterious sickness that kept her bedridden, though she remained a strong-minded and determined woman throughout that period.

Despite her elevated position as abbess, she was true to the humble Franciscan ideal by serving the sick, waiting table, and washing the feet of the begging nuns. She came from prayer, it was said, with her face so shining it dazzled those about her. In spite of her ongoing struggles with Church authorities — or perhaps because of them — popes, cardinals and bishops often came to consult her.

Clare was declared a saint sixty years after her death.

More poetry by Clare of Assisi