Rolf Jacobsen – When They Sleep

Published by Ivan M. Granger at 8:47 am under Poetry

When They Sleep
by Rolf Jacobsen

All people are children when they sleep.
there’s no war in them then.
They open their hands and breathe
in that quiet rhythm heaven has given them.
They pucker their lips like small children
and open their hands halfway,
soldiers and statesmen, servants and masters.
The stars stand guard
and a haze veils the sky,
a few hours when no one will do anybody harm.
If only we could speak to one another then
when our hearts are half-open flowers.
Words like golden bees
would drift in.
— God, teach me the language of sleep. 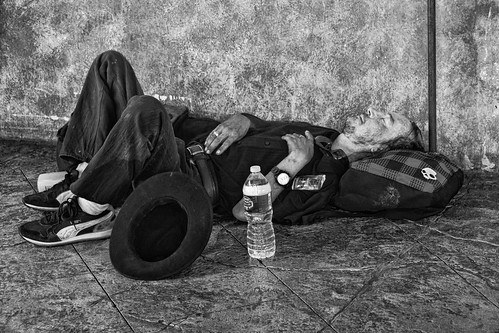 For much of the past year I have been free from chronic fatigue symptoms, but they have been kicking up again in the last few weeks. So today why not a meditation on the easy wisdom of rest and sleep?

In sleep, we rediscover our simple innocent being. We are open, vulnerable, in an odd way supremely present in that unconscious state.

All people are children when they sleep.
there’s no war in them then.

All our careful defenses, which have a way of mutating into unnoticed cruelties, loosen in sleep, and slide off our shoulders like a heavy coat. All harm and armor are set aside.

…a few hours when no one will do anybody harm.

Even when our hearts struggle to trust and rest, we have a built-in biological faith that kicks in at night.

The chest unlocks, and the stifled tide of the breath resumes its flow in and out again.

They open their hands and breathe
in that quiet rhythm heaven has given them.

Imagine the waking world blessed with such unavoided honesty. Think what words and deeds our blossoming hearts would draw to them.

If only we could speak to one another then
when our hearts are half-open flowers.
Words like golden bees
would drift in.

I look outside the window to see a hazy morning sun. The call of a lone finch echoes through the morning air. My breath slows and deepens. My eyelids grow heavy.

– God, teach me the language of sleep.

Rolf Jacobsen’s poetry often explored modern subjects: urban life, cars, the industrial machine. But Jacobsen’s view of the technological 20th century was nuanced and expressed a melancholy awareness of how nature, quiet, and the interior life were overlooked in this new enthusiastic haste.

Jacobsen was born in Oslo (then called Kristiania). His father was a dentist and his mother a nurse. He was raised for part of his childhood by his uncle, a railway engineer. Jacobsen studied several years at the University of Oslo without graduating.

He married in 1940 and had two sons. He was happily married, and wrote several poem about married life.

World War II was turbulent for Jacobsen. Like many in Nazi-occupied Norway, he became a member of the Norwegian Nationalist Socialist Party in order to get by. When the Germans were defeated, he spent nearly four years in prison for his affiliation with the occupiers.

Afterward, he settled in Hamar, north of Oslo, and became a bookseller and journalist. During this period he converted to Catholicism. Only after several years did he return to poetry, writing with renewed compassion, continuing to meditate on the shifting pace and focus of life in the modern era, becoming a greatly loved and respected poet later in life.

5 Responses to “Rolf Jacobsen – When They Sleep”