Namdev – The drum with no drumhead beats

Published by Ivan M. Granger at 8:39 am under Poetry

The drum with no drumhead beats
by Namdev

The drum with no drumhead beats;
clouds thunder without the monsoon;
rain falls without clouds.
Can anyone guess this riddle?

I have met Ram the beautiful,
and I too have become beautiful.

The philosopher’s stone turns lead into gold;
costly rubies I string with my words and thoughts.
I discovered real love; doubts, fears have left me.
I found comfort in what my guru taught me.

A pitcher will fill when plunged in water,
so Ram is the One in all.
The guru’s heart and the disciple’s heart are one.
Thus has the slave Namdeva perceived Truth.

— from Songs of the Saints from the Adi Granth, Translated by Nirmal Dass 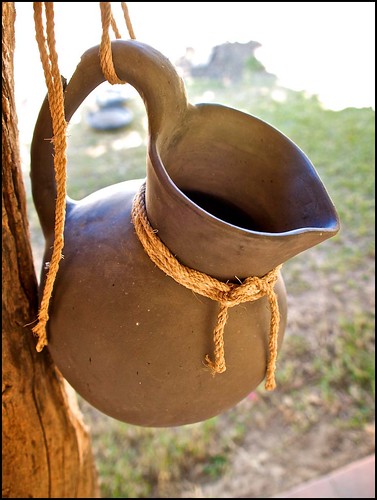 Namdev starts this song with a riddle: a drum sound “with no drumhead”, and “thunder without the monsoon”… We have the reverberation, but without an initiating event. In deep meditation an inner sound is heard resonating everywhere. In various Indian traditions this primal sound is called shabd or omkara.

And his riddle also tells us that “rain falls without clouds.” The rain that falls is amrita, the bliss-filled drink of divine communion. This is an actual substance, though a subtle one. When the mind is entirely clear and purified (“without clouds”), this “rain” descends from the sky-bowl of the skull, touching the tongue with indescribable sweetness, warming the heart, and filling the awareness with a transcendent joy.

Try rereading the poem with that sense of inner meaning. Read slowly this time, savoring it, feeling what this ecstatic saint is really saying. “The drum with no drumhead beats…” Do you hear it quietly resonating within your own settling awareness? “Clouds thunder without the monsoon…”

Here are my favorite lines:

I have met Ram the beautiful,
and I too have become beautiful.

In this state of bliss and profound unity, we recognize that we ourselves, as individual beings, are a pure emptiness, without any substance of our own. Finally seeing this, we recognize ourselves as being of the same nature as the Divine Reality we witness — and that presence is vast, radiant, whole, and “beautiful.” It is beautiful, and we too are that beauty!

It is as if by touching something utterly whole and perfect, all of our imperfections and divisions are dispelled by that total vision.

It is that contact that transmutes the “lead” of the fragmented ego identity into the “gold” of unbounded awakened awareness.

I discovered real love; doubts, fears have left me…

In such an immense ocean of “real love” and the wholeness of gnosis, one’s underlying existential doubts and fears dissolve.

A pitcher will fill when plunged in water

This is a reference to popular yogic metaphor. The individual ego-self is like a leaky pitcher that requires constant refilling to keep even a small amount of water in it. The only way to fill it up is to toss it into the ocean. The pitcher is for the finally filled with water, surrounded by water. The separating walls of the ego become meaningless, since the water of that divine consciousness is both inside and outside with no difference… Suddenly we see a world of drowned pitchers, the same water filling and surrounding everything.

Ram is the One in all.

It is a new year, and that is always a time for hope, yet many problems remain unresolved, accompanied by much anger. It is easy to get caught up in the escalations of outrage. I am focusing my life to meet the uncertain road ahead with a combination of practicality, flexibility, and engaged love. Meditation and poetry are two excellent ways to continuously return to the heart that we may know the way forward.

Blessings to you all in the new year!

Namdev was born about 1270 into a family of low-caste tailors, though as he grew he showed little interest in the family profession or in any worldly affairs. As is sometimes common in rural India, he was married as a child, at age 11. He eventually had four children. His marriage was not a happy one, however, as his wife belittled Namdev’s devotion to God, while Namdev, for his part, did little to earn much needed income for the family.

Namdev came under the influence of the bhakti poet-saint Jnanadev, who was several years his senior. Namdev became a wandering minstrel, traveling through the countryside chanting and singing songs of devotion.

In his fifties, Namdev settled down again with a group of devotees that had gathered around him.

It was in the household of Namdev that Janabai served as a maid, a revered poet in her own right.

Namdev, like his mentor Jnanadev, was a devotee of the Vitthala movement, a pastoral sect with a distinctive bhakti (devotional) attitude dedicated to Krishna or Rama. Many poets and saints in the bhakhti traditions, including Namdev, are revered by the later Sikh religion, as well.