Published by Ivan M. Granger at 8:00 am under Poetry

Skylark
sings all day,
and day not long enough. 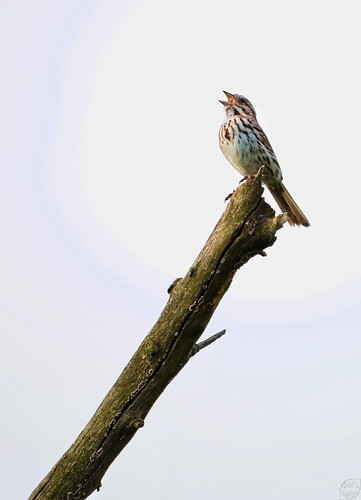 A haiku for us today, one that brings me a smile every time I read it.

This is one of those poems where any attempt at commentary feels absurd. What it says is simple and direct, yet it resonates in the mind and the heart. Reading it, I find myself questioning the importance of busy daily activities. On those weary days when I am just ready for the day to be over, have I misspent my day? Have I held back my song?

After a year of pretty good energies, I seem to be dealing with chronic fatigue patterns coming up again. I am always reminded of the need for balance and a clarity of purpose. The more scattered I get and try to accomplish everything at once, the more my system insists that I pause. Our struggles are often our best and most determined teachers…

Today might just be a day to burst forth in song!

Basho took his name from the Japanese word for “banana tree.” He was given a gift of a banana tree by a student and the poet immediately identified with it: the way the small tree stood there with its large, soft, fragile leaves. (See his banana plant haiku.)

Basho was probably born in 1644 in Iga Province outside of Kyoto, Japan. His father was a poor samurai-farmer.

As a teenager, Basho entered the service of the local lord, acting as a page. The young lord was only a couple of years older than Basho, and the two became friends, enjoying the playful exchange of haiku verses.

When Basho was still a young man, his friend and lord died. In reaction, Basho left home, abandoned his samurai status, and took to a life of wandering.

After several years, he settled in Edo (Tokyo), continuing to write and publish poetry. His haiku began to attract attention and students gathered around him. At about this time, Basho also took up Zen meditation.

Basho remained restless, even in his fame. A neighborhood fire claimed his small house in Edo leaving him homeless, and Basho once again took up the itinerant life, visiting friends and disciples, taking up residence for brief periods only to begin another journey. It was during this time that Basho composed some of his greatest haiku.