Published by Ivan M. Granger at 8:01 am under Poetry

At the Nachi Kan’non Hall
by Muso Soseki 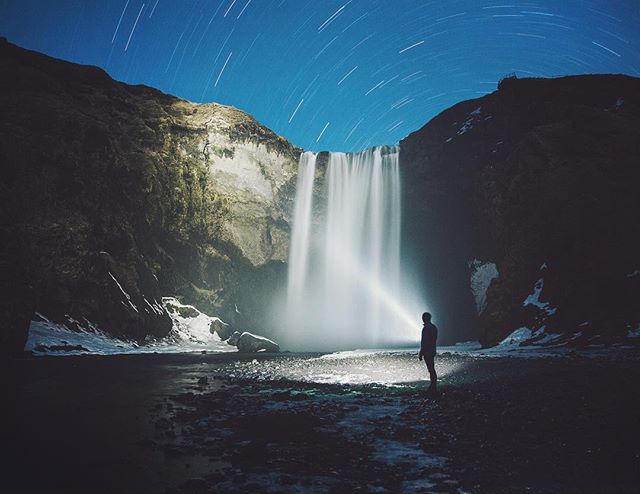 I love that opening phase–

The Milky Way
pours waterfalls
over this human world

I imagine stepping outside after a long day, standing beneath the night sky, and letting the waters of the universe wash over me. It’s a cleansing image, purifying, healing to the wearied spirit.

the cold
rushing tumbling sounds
echo through the blue sky

Soseki emphasizes sound, the waterfall-like sound of the night. Try it sometime to remind yourself. Late at night, step outside, or just open the window and lean your head out. Close your eyes. Listen. Do you hear it? In the absence of all other noise, with no movement around and with thoughts at rest… a soft sound is heard. At first it might be like the quiet chirping of crickets in the night, the hum of beesong, or the flowing of gentle stream. It is heard as a random, soothing “white noise” that seems to emanate from the base of the skull.

As we quiet more, the sound grows into a rushing sound, like a waterfall. Sometimes this sound resolves into a clear pitch that can resemble the pure note of a flute or the ringing of a bell.

First it is heard and, finally, felt throughout the body.

This sound is Krishna’s flute calling his devotees to him. It is the ringing of the bells of paradise. It is Soseki’s heavenly waterfall.

This sound signals the beginning of deep meditation. The more we sit with this sound, the more the awareness expands and the heart naturally opens with inherent compassion, as the universal waters pour over us, refreshing us, revitalizing, awakening.

How lucky I am
to have no trouble
hearing

Muso Soseki first practiced Zen under the guidance of a Chinese teacher but he “failed miserably.” He later studied with the Japanese Zen master Koho Kennichi and soon began to unfold into profound awakening, receiving certification of enlightenment in 1339.

Muso Soseki went on to teach large numbers of students and, like many Zen practitioners, write poetry. He also became an advisor to the Shogun and helped to re-establish trade and communications between Japan and China.

Soseki is perhaps most famous, however, for his profound influence in the art of Zen gardening as spaces to cultivate awareness.