Tukaram – All men to me are god-like Gods!

Published by Ivan M. Granger at 8:29 am under Poetry

All men to me are god-like Gods!
by Tukaram

All men to me are god-like Gods!
My eyes no longer see
vice or fault.

Life on this suffering earth
is now endless delight;
the heart at rest and full,
overflowing.

In the mirror, the face and its reflection
watch each other;
different, but one.

And, when the stream pours into the ocean…
no more stream!

— from Real Thirst: Poetry of the Spiritual Journey, by Ivan M. Granger 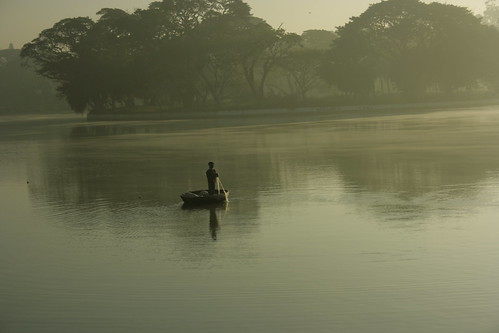 A meditation on the fundamental unity and wholeness underlying the surface appearance of separation. Every pain, every broken heart, every human yearning is ultimately found to be an expression of that one psychic need — for wholeness. Satisfy that one need at its root, and what is there left to want? The heart in endless pursuit finally attains rest and contentment. Even the world that imagines itself in fragments is seen to be whole, one fluid unity. People are are not people but divine immensities, and the perception of suffering is replaced by timeless bliss.

And, when the stream pours into the ocean…
no more stream!

Tukaram was born in Maharashtra, in the western region of India, to a lower caste Shudra family. Despite being of a lower caste, the family was wealthy by rural standards.

When Tukaram was thirteen, his father fell ill and the boy had to take on the responsibility of supporting his family. Soon after, both parents died.

Hardships continued to follow Tukaram. His first wife died during a famine, and his second wife had no respect for his devotion to God.

Contrary to the traditional Hindu model of receiving spiritual initiation from a guru, Tukaram was initiated in a dream by Lord Hari (Krishna/Vishnu) Himself.

When Tukaram sensed his end was approaching, he stepped into a river, as many other saints have done. It is said that his rug and instruments returned to shore, but his body was never found. Devotees believe he was taken bodily to heaven.

During Tukaram’s relatively short life, he was constantly singing devotional hymns called abhangs. He composed over 5,000 of these hymns. Many of his songs are autobiographical.

One Response to “Tukaram – All men to me are god-like Gods!”